In Drexel’s Product Design program, great ideas begin with the end in mind.

Banner is a product design major in the Westphal College of Media Arts & Design.

As a student in the Product Design program of the Westphal College of Media Arts and Design, Danielle Banner set herself a challenge: To create a product that would connect people to nature.

From March to May 2017, she researched and designed her final product: BUD, a desktop companion plant with a digitally enabled planter that helps office workers bond with the outdoors. 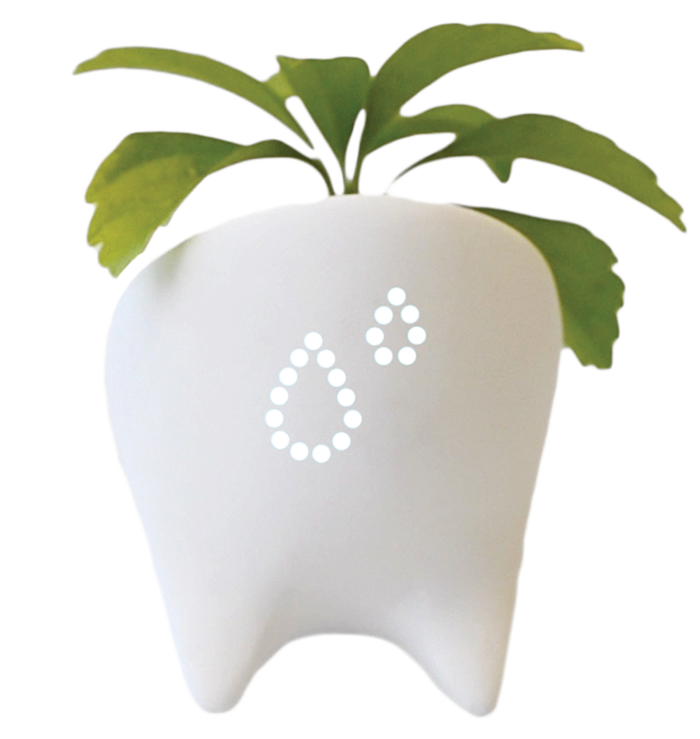 Banner developed 20 to 30 small clay models and five full-scale models before settling on the final design and name. “I love puns, and this is both a desk buddy and it features a budding plant,” she says.

Her research and design process was intense. First, she interviewed kids, teens and older adults about their relationship with the outdoors. She learned that spending time in nature was a de-stressor for all people, no matter their age.

However, many people reported that it was difficult to enjoy themselves outdoors because of work and other commitments.
The first prototype of BUD had interactive touch screens and “faces” that would communicate with people, but it didn’t test well for a few reasons, Banner says. “I was trying to integrate technology with nature in a way that wasn’t distracting…but this was distracting. I wanted to make BUD more of a companion rather than something impersonal,” she says.

Her final version was compact, had “legs,” could interact with other BUDs, and included a seed pack so users could choose their plant variety.

“She did a good job of trying to understand people’s needs. …I see it being marketable,” says Michael Glaser, an associate professor who runs the Product Design program. The project earned Banner an A.

The BUD comes with an app to helps users set breaks to go outdoors with their BUD throughout the day.

The Product Design program is young but alumni have created successful ideas. A couple students have sold their concepts or started a company. One former student created glasses for people with seasonal affective disorder. In 2017, a student focused on turning fabric waste into pulp and worked with the Department of Materials Science and Engineering in the College of Engineering to turn those fibers into biodegradable furniture.

The program’s philosophy is to let students see where ideas take them — always with the end-user in mind. “We start with community first, then move on to the process and then the outcomes,” says Glaser. “The student has to convince us that they made a decision based on a user’s needs.”