Chronic use of opioid drugs tampers with neuropeptides in the brain, leading to drug addiction.

Van Bockstaele is the founding dean of the Graduate School of Biomedical Sciences and Professional Studies in the College of Medicine.

Addiction to heroin or prescription painkillers has created a health epidemic in the United States that affects about 2 million people a year and costs the country $484 billion annually, according to the National Institute on Drug Abuse.

For many years, Elisabeth Van Bockstaele, the founding dean of the Graduate School of Biomedical Sciences and Professional Studies in the College of Medicine and a professor of pharmacology and physiology in the College of Medicine, has focused her research on the role stress plays in opiate addiction. Her work has been supported by around $6 million in funds over the past 16 years, which includes a recent five-year grant of $1.8 million from the National Institutes of Health.

The brain contains opioid receptors, and heroin, morphine and other opiates can bind to them. The drugs dampen pain signals and also trigger receptors that release dopamine, which creates feelings of euphoria. Drug abusers are motivated to seek the high again and again.

“Drug addiction is showing that the brain can be dysregulated, and people keep taking the drug to self-medicate, to correct that,” says Van Bockstaele. 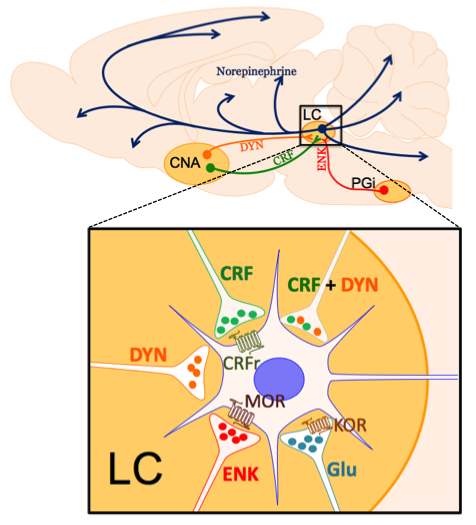 The locus coeruleus-norepinephrine system regulates stress-integrative circuitry in the brain.

Stress appears to predispose one to opiate abuse, and chronic stress can hinder addiction recovery, according to Van Bockstaele.

Her work has unveiled the complex circuitry of the locus coeruleus-norepinephrine system, responsible for the fight-or-flight response. It is regulated by both naturally occurring opioids in the brain and by the stress-related neuropeptide corticotropin-releasing factor (CRF).

Enkephalin, an opioid peptide produced by cells, is released under conditions of stress to make the brain less hyperactive. “When an individual takes heroin or morphine chronically, the drugs do decrease natural production of endogenous enkephalin,” explains Van Bockstaele. That catapults an individual into an anxious state when not on the drug.

At the same time, the CRF, which activates norepinephrine during stressful situations, increases. But too much CRF also causes anxiety.

“These two neuropeptides that need to be yin and yang, in balance,” Van Bockstaele says, “are totally disrupted by chronic abuse of this drug, causing brain cells to change their endogenous production levels.”