Can humanoid robots one day do the kind of post-disaster work that humans can’t? A team of Drexel researchers, working with colleagues around the world, are in the process of finding out. _by Mike Unger / illustration by Josh Cochran 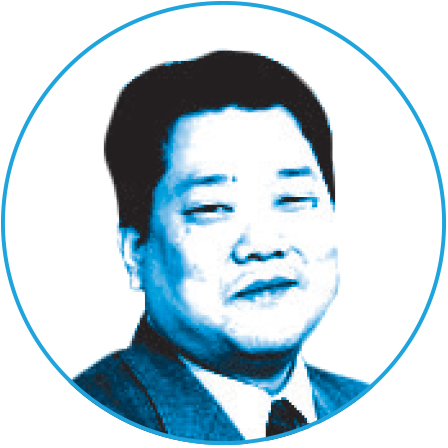 Oh is a professor in the College of Engineering and director of the Drexel Autonomous Systems Laboratory.

Fukushima, Japan, was among the most dangerous places on Earth in the hours, days and weeks following a massive earthquake and tsunami on March 11, 2011. The flooding of several reactors at the town’s nuclear plant caused the biggest global nuclear meltdown in more than 25 years, and the world watched helplessly in horror as deadly radiation was released into the atmosphere.

Could robots have helped mitigate the disaster? Paul Oh, a professor in Drexel’s College of Engineering, is leading a team of Drexel students and nine other universities in a challenge the U.S. Defense Advanced Research Projects Agency is sponsoring in hopes of answering that question.

“In the case of Fukushima, there was no absence of tools or vehicles, but the radiation levels were just so high you couldn’t have people simply, quickly turn off a valve,” Oh says. “If they were able to do that they could have prevented huge levels of catastrophe from happening.”

Over the course of the next two years, teams from academia, industry and the private sector will attempt to design and deploy a robot capable of disaster response in radioactive or bio-contaminated areas. The robot must be able to drive vehicles, navigate human-centered environments, use tools and manipulate equipment.

It’s a massive challenge, with a prize to match: the winning team will receive $2 million.

“This is a game changer for the university,” Oh says. “Drexel is front row center on the world stage because of this DARPA challenge. We’re up against some heavyweights. We’re up against NASA, which has put a humanoid on the international space station. We’re up against a $50 billion defense contractor named Raytheon and some other leading universities in the world. For Drexel to be part of this is phenomenal. I don’t think Drexel’s ever had this kind of opportunity.”

“This is a robot challenge, but it’s also a human challenge. We have to deal with a lot of people who like to do things in different ways.”
–Daniel Lofaro, Drexel PhD candidate

The contestants have until December 2013 to design a robot that can mount, drive and dismount a vehicle; travel across rubble; remove debris; open a door; ladder climb; use a tool to break through a concrete wall; locate and shut off a leaky valve; and remove and replace a pump. All these tasks are necessary in disaster-mitigation situations like the one in Fukushima.

“You have robots that are in the operating room right now performing medical surgeries,” Oh says. “You have drones flying around, you have robots vacuuming up rooms. There’s a wide spectrum of tasks that are being performed by robots now, but this particular robot challenge is unprecedented. When it’s all said and done, I think before the year 2020 you’re going to see robots performing such [tasks] more commonplace.”

But the teams in the DARPA challenge don’t have seven years. The months are dwindling until the number of competitors is cut to two in December 2013. The semifinalists will have another year before they go head-to-head.
The Drexel team, however, thinks it has a big advantage on its competitors. It already has the robots. The team is working with seven humanoid robots, named Hubo, developed by KAIST.

“Drexel’s partnership with KAIST plays a pivotal role in the team’s strategy,” Oh says. “KAIST is a world leader in the electro-mechanical design and fabrication of the Hubo humanoid. Drexel and its American partners are world leaders in information technologies and artificial intelligence. The result is a team that collectively has over 200 person-years in hardware and software design of humanoids to apply to the challenge.”

Perhaps no American knows the inner workings on Hubo better than Daniel Lofaro, a PhD candidate who’s leading the team. He’s been working with the 130-centimeter Hubos since 2007.

Hubo has sensors and an inertial measurement unit similar to our internal ears, which can tell how it’s balancing. It also has sensors in its wrists and ankles that can tell the force that’s pressing against the ground.
If Hubo sounds like it’s a fully functional robot ready to roll out, think again, Lofaro says.

“This robot has not been particularly reliable in the past,” he says. “These robots don’t run on wheels, they are actuated. You tell the joints to go to a position and it will go there. When you tell it to go to a certain location it goes there and it stays there. Which is the down side in some respects and the upside in other respects.”

The robots are controlled entirely by humans.

“Right now the robots are not autonomous,” Lofaro says. “All the control is done on board. It has two computers on board right now, and you connect wirelessly and you give commands. To complete these events we need to make it autonomous because it’s very clear that DARPA will artificially inject latency into the wireless communication, as well as no communication at all, so we can’t rely on the signal. Just like a regular disaster situation. The robot has to be semi-smart.”

Thus, the challenge for the Drexel team is as much a software one as it is a hardware one.

“We’re working on our system that I’m creating with my partners at Georgia Tech that is a totally open-sourced platform that allows you to make a separate process that controls the robot just by setting joint angles,” Lofaro says. “The beauty of this system is that if someone else’s control fails, it won’t affect yours. It’s specifically designed so that multiple contributors can contribute and have their stuff fail and other people’s stuff will still work.

“Because we have [multiple] universities working with us, that’s really needed. This is a robot challenge, but it’s also a human challenge. We have to deal with a lot of people who like to do things in different ways.”

Oh and Lofaro seem supremely confident that their team can modify Hubo to meet the DARPA challenges.

“Technically, all of the events are very doable,” Lofaro says. “Right now everyone’s doing simulations on the real robot and they’re finding out what they need to actually complete it. The robot’s too short right now to actually drive a car. It can’t reach the pedals, so we know we have to add length to the legs. But how much? We know we need longer arms, arms that are stronger, hands that are stronger. This is going to come out of our simulations, our real-world experimenting.”

Software that interfaces properly with the hardware is a nagging problem, Lofaro says. His goal is to make that relationship as bulletproof as possible.

“A lot of people we work with are computer science guys and they’re used to simulations where it just works. You tell it to do something and it does it. I want to be able to push the robot down, shake it, break its arms, and for it to get back up and say, ‘My arm is broken but guess what, I’m still mostly functional.’”

Oh frames the challenge this way:
“A lot of robots don’t really have the intelligence and perception and cognition level beyond even a 2-year-old child. For this challenge, where you’re asking them to drive a vehicle, climb ladders, turn valves, open doors, you can’t even imagine a 2-year-old doing that. So how do you create the software intelligence so that you can make them act more like a 10-year-old child?

“How do we give robots that sort of intelligence? We have to be able to teach the robot. The robot right now needs a lot of instruction. They need to know exactly what kind of ladder they’re going to climb. How steep is it? What should they do when they get to the top of the ladder? How do they swing their legs over? You can just imagine an infant who’s never climbed a ladder before—so what’s involved in telling them what they can and cannot do.

“There’s a lot of instruction that’s required, and that’s exactly what our team is focusing on.”

In announcing the challenge, DARPA’s Tactical Technology Office says, “The Department of Defense’s strategic plan calls for the Joint Force to conduct humanitarian, disaster relief and related operations. The plan identifies requirements to extend aid to victims of natural or man-made disasters and conduct evacuation operations. Some disasters, however, due to grave risks to the health and well being of rescue and aid workers, prove too great in scale or scope for timely and effective human response. The DARPA Robotics Challenge will attempt to address this capability gap by promoting innovation in robotic technology for disaster-response operations.”

Drexel is in a heady neighborhood, working on one of the world’s most complex problems, competing against some of its leading technology institutions.

“We’re kind of like the equivalent of Rocky here,” Oh says. “We have no silver spoon. We don’t have a $50 billion war chest that a defense contractor has, we don’t have legions of engineers like NASA does. We’ve just got very hard working, very practically minded students and faculty.

“By winning this DARPA robotics challenge, we prove to the world that Drexel’s brand of education works. That co-op and use-inspired research should not just be a national model, it should be a world model.”