A designer molecule created at Drexel beats HIV at its own game, rendering it harmless before it can hijack healthy cells — and bringing researchers closer to understanding and defeating the virus. Lini S. Kadaba / illustrations by Joe Lertola, Bryan Christie Design 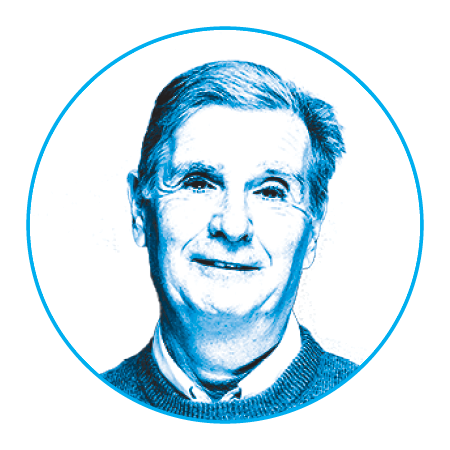 Chaiken is a professor in the Department of Biochemistry and Molecular Biology. 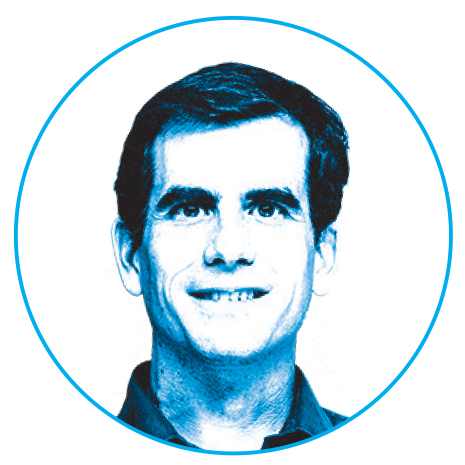 Abrams is a professor of chemical and biological engineering in the College of Engineering.

The AIDS virus is a devilish adversary. Worldwide, it kills nearly two million people a year. The shape-shifter mutates over time, evading attempts to contain it. It can hide inside cells for long stretches. And despite decades of study, exactly how its machinery functions is still a mystery.

At times, it can seem like the only way to eradicate HIV is with the help of a superpower-endowed hero or two. Now two AIDS-fighting scientists at Drexel University just might prove the answer.

Researchers Irwin Chaiken and Cameron F. Abrams have a promising new weapon in their arsenal — DAVEI, a novel designer molecule that has a trick or two of its own. DAVEI, which stands for dual-action virolytic entry inhibitor, fools the AIDS virus into destroying itself.

Their work offers exciting leads not only on ways to fight the disease but also to prevent initial infection. In addition, the novel mechanism might work similar magic against other villains, including influenza, Ebola and leukemia, say the scientists. For now, though, the focus is AIDS.

“Let’s design a new molecule that will stick to these surface proteins on the virus but in a very particular way so that it tweaks those proteins and springs the trap.”

Chaiken’s lab has already created two other novel classes of compounds to inactivate HIV — peptide triazole thiols and gold nanoparticle peptide triazoles. The partnership with Abrams and the College of Engineering has allowed the two researchers to develop an overall program of virus destroyers, of which DAVEI is a uniquely interesting class because it has a dual mode of action that the other compounds do not.

Their partnership came out of conversations the two shared a few years ago. Listening to Chaiken describe his work, Abrams took an engineer’s perspective, focusing on the principles of pressure. He hypothesized that the virus seems to be under pressure, like a balloon. Why not try to pop it?

One pathway was to take advantage of unstable proteins on the surface of the virus. Normally, these protein spikes attach to a healthy cell under attack and the two fuse together, creating an opening for the virus to transfer its genetic material. The cell is rewired, disrupting its immune function and leading to AIDS. Abrams suspects that at least one of the spikes is primed like a mousetrap with bait, and when prodded a certain way, undergoes a change in structure.

“So I had this idea,” he says. “Let’s design a new molecule that will stick to these surface proteins on the virus but in a very particular way so that it tweaks those proteins and springs the trap.” The result is the irreversible destruction of the virus before it ever reaches a healthy cell.

DAVEI is engineered to bind to the envelope protein on the surface of the virus, like Chaiken’s other compounds. When that happens, the virus appears to be fooled into thinking it has found its target.

But DAVEI doesn’t stop there. It also binds to the membrane of the virus and hijacks its machinery, setting in motion the infection process prematurely. Because the virus is not actually attached to a host cell, it spews out its genetic payload harmlessly. Like a popped balloon, the virus essentially deflates, the researchers speculate.

Abrams says the next puzzle to solve is whether an infected cell that is not yet producing HIV can be tricked into starting the process with DAVEI waiting in the wings to intercept and kill it.

“Killing latent virus is a goal,” Abrams says. “There will be no cure for HIV until that has been accomplished.”

It’s “a very clever design,” says James A. Hoxie, a professor of medicine at the University of Pennsylvania and director of the Penn Center for AIDS Research. “Their approach of not only entering the site, but triggering the machinery so that it activates inappropriately … is rather novel. These events that cause the virus to trigger are of tremendous basic interest. It really is the internal workings of the virus.”

Hoxie says the two men are poised to make a substantial contribution to the basic understanding of how the virus is wired. “And that gives us more tools for how to disrupt that virus,” he says.

The other classes of compounds that Chaiken’s lab has created also block the virus from interacting — that is, fusing — with the host cell, thereby inhibiting infection. Essentially, the virus is stopped in its tracks. That work was published in ChemMedChem in 2011 and in Retrovirology in late 2013.

While all three compounds take advantage of the unstable equilibrium of the HIV virus, they appear to work by different mechanisms. Each also has its strengths and weaknesses.

Peptide triazole thiols, for example, are small molecules — an important quality for a drug — but they are susceptible to breaking down in the body. (Though synthetic, they are too similar to natural compounds that the body’s enzymes break down.) 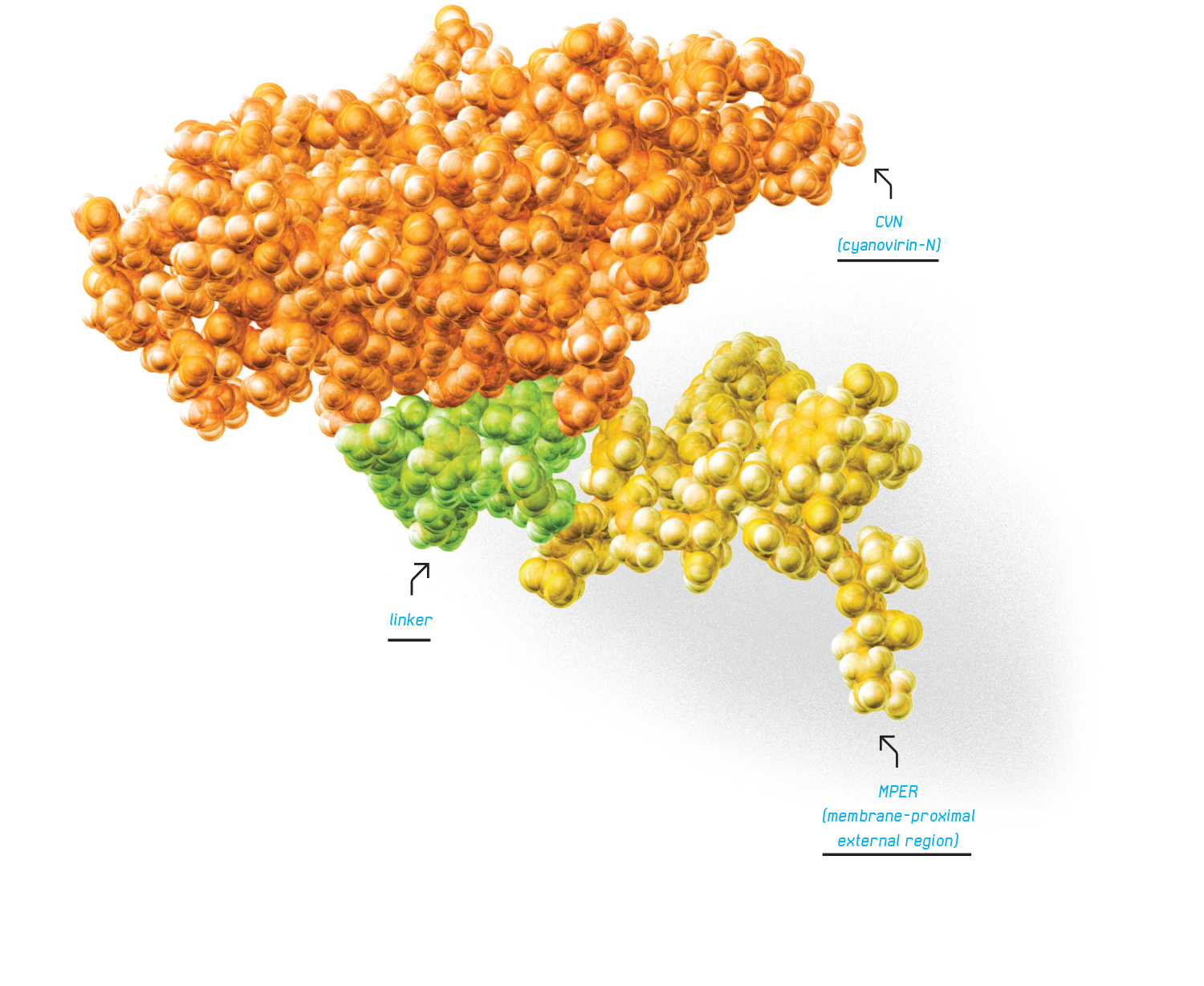 DAVEI is a type of chimeric recombinantly engineered protein, which means it is a molecule made from other pieces of molecules. It has two main parts. The platform is the protein cyanovirin-N, which has long been known to bind strongly to HIV. Added atop is the membrane-proximal external region (MPER), a small piece of the viral protein itself that leads to the breakup of the virus.

“We found that the multivalent gold particles were very potent as antiviral agents,” Chaiken says. In fact, the potency is three orders of magnitude greater compared to both the peptide triazoles and DAVEI. But despite this strength, gold particles can accumulate in the liver, posing toxicity threats. “We need to find a nano substitute for the gold particle,” he says.

While DAVEI’s dual mode of action is an exciting discovery, it also needs improvements to its components before it can be used clinically.

DAVEI is a type of chimeric recombinantly engineered protein, which means it is a molecule made from other pieces of molecules. It has two main parts. The platform is the protein cyanovirin-N, which has long been known to bind strongly to HIV. Added atop is the membrane-proximal external region (MPER), a small piece of the viral protein itself that leads to the breakup of the virus. The research was published in the October 2013 edition of the American Society for Microbiology’s Antimicrobial Agents and Chemotherapy.

Going forward, the researchers are looking for new, improved platforms on which to build their HIV-busters. Cyanovirin-N is not the best choice for a drug because of concerns that it might be cytotoxic in humans. The researchers want to “build a more robust, more specific version of DAVEI that would be worth putting into trial,” Abrams says.

According to Abrams, “hunter/killer molecules” like DAVEI, which only target the virus and not healthy cells, could be used in topical microbicides to prevent infection. “HIV wouldn’t be able to get through,” he says.

Daniel Malamud is a professor of basic science at New York University’s College of Dentistry and a professor of medicine at its School of Medicine who specializes in infectious diseases. He thinks DAVEI shows promise as a microbicidal agent. But he cautioned that the “important and innovative study … is really a first step.”

Malamud would like to see DAVEI tested against newly isolated clinical strains of the AIDS virus, not just the laboratory variety commonly used in experiments. “Just because something works on the laboratory strain doesn’t mean it will work on what I call the street virus, a fresh clinical isolate,” he says.

Abrams and Chaiken realize the road ahead is long and expensive. “All three classes are virus inactivators, which is wonderful,” Chaiken says. But “they all have weaknesses. None is useful as a drug in the current incarnation. They need to be developed.”

In fact, Chaiken and Abrams say their primary focus is to better understand the inner workings of HIV on a molecular level, and DAVEI and the other compounds are useful tools to that end.

“All of them are helping us to learn different ways to inactivate the virus, which is in some ways the most central concept here,” Chaiken says.

“There is an enormous need out there for new strategies,” says Abrams, whose work with Chaiken is funded with a $1.1 million National Institutes of Health grant awarded in 2009. “The more I learned about HIV, the more diabolical it seemed. It’s a fascinating machine.”

Adds Chaiken: “We must understand the mechanism in order to guide better design. We’re trying to engineer the sons and daughters of DAVEI and the other virocidal molecules we have discovered.”