A 10-foot-long, torpedo-shaped fish lurks in murky freshwater, its body casting a shadow on the creatures below. The opened mouth reveals dagger-like fangs, some two inches long, perfect for lacerating the flesh of fellow stream-dwellers...This fierce prehistoric fish hasn’t lived in many millennia, but art is bringing it to life. by Mary Alice Hartsock 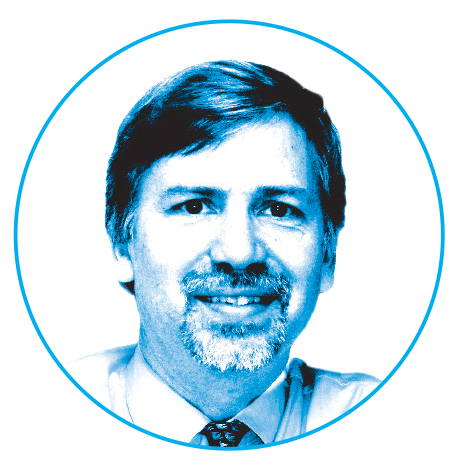 Daeschler is a professor in the Department of Biodiversity, Earth & Environmental Science in the College of Arts and Sciences and curator of Vertebrate Zoology at the Academy of Natural Sciences.

Paleoillustrator Jason Poole dips the tip of his brush into a circle of white paint. Slowly and delicately, he dots the thickly painted canvas just beyond the predator’s gaze. From the shadowy background, particles emerge, gleaming as if reflecting the sun. Complete with vicious grin, his predator swims down for the kill.

Poole was charged with depicting Hyneria lindae, the largest creature living in an ancient stream ecosystem in Devonian-age Pennsylvania, about 365 million years ago. This lobe-finned fish, belonging to a group of back-boned animals called sarcopterygians, was at least twice the size of the largest of the other animals with which it shared the waters. 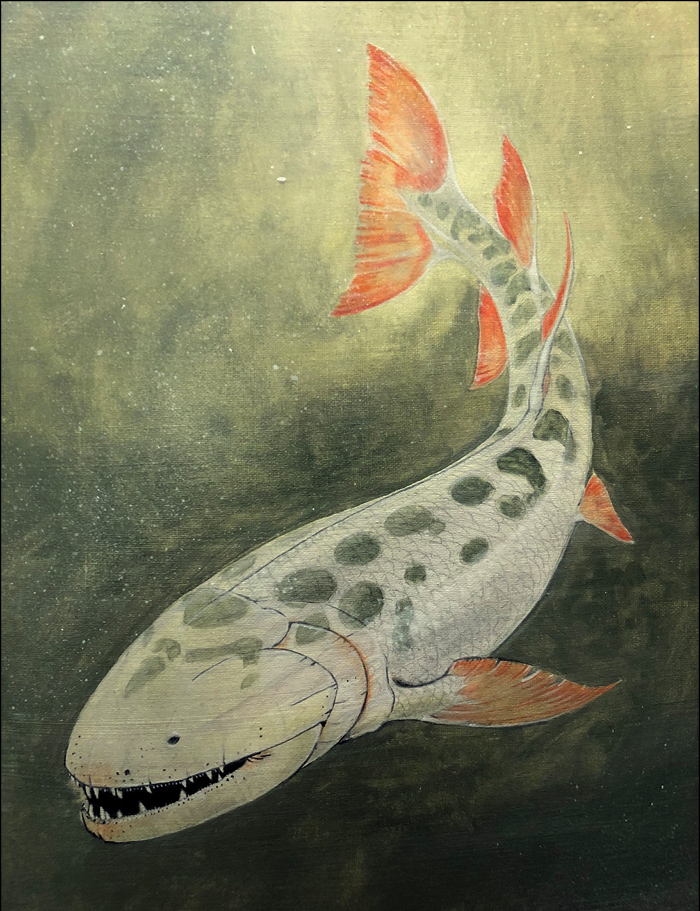 The image of Hyneria lindae at the top of this screen was produced in 2009 by author and accomplished fish artist Flick Ford. Academy researchers Ted Daeschler and Jason Downs advised Ford on many of the details of his reconstruction based on what they knew then about this aquatic predator. By the time Jason Poole recreated the same fish nine years later (see inset above), the scientists were able to share a wealth of new information about the fish they had gleaned from new fossils discovered in Clinton County, Pennsylvania. A side-by-side review also highlights the range of choices available to illustrators as they reconstruct a creature that scientists have never seen in life.

When he received the Hyneria lindae assignment, Poole wasn’t concerned about the fish’s size. As manager of the Academy of Natural Sciences at Drexel University’s Fossil Prep Lab and Dinosaur Hall, he is used to depicting dinosaurs and other massive terrestrial animals. Tackling an aquatic monster — one without legs at that — was a challenge he eagerly accepted.

The scientists have spent decades studying fossils to trace the evolution of life in the Devonian Period. One of their most productive research sites is located just a three-and-a-half-hour drive northwest of Philadelphia, at a highway roadcut in Clinton County, Pennsylvania. During the Devonian, subtropical streams flowed west through Pennsylvania toward a seaway in Ohio. These streams provided the ecological setting for plants, small invertebrates, armored fish, shark relatives and lobe-finned fish.

“The freshwater ecosystem in which Hyneria lindae lived was a hotbed of evolutionary change during the Late Devonian,” says Daeschler. “It was during this timeframe that a closely related branch of lobe-finned fish developed the earliest limb-like appendages.”

Eager to fit more pieces into the evolutionary puzzle, Daeschler and Downs studied fossils from the Academy’s collection that were retrieved from a dig site in Clinton County by Academy teams during the past 25 years. They compared fossils of Hyneria lindae to closely related species to delineate the unique qualities of this predatory fish.

They built upon the work of Keith S. Thompson, the Academy’s president from 1987 to 1995, who described and named Hyneria lindae in 1968 based on limited fossil material collected at the same site in the 1950s. Through the new fossils, scientists discovered that Hyneria lindae had a wider, more flattened head shape and a differently positioned and smaller eye than those of other similar creatures of its time. The group of bones that covers the gills and provides structure for the face was narrower than previously thought.

Daeschler and Downs also concluded that Hyneria lindae had an elaborate sensory canal system through its skull bones and scales, which enabled it to sense the movement of other organisms swimming nearby. This feature gave the fish a strong advantage for hunting and navigating deep channels within the sediment-laden streams.

Daeschler and Downs’ findings were published in the Journal of Vertebrate Paleontology in May 2018.

The scientists wanted an illustration of Hyneria lindae to help others visualize what the creature may have looked like in life. They didn’t have to look far to identify their artist.

An experienced paleoillustrator with a background in fossil excavation and preparation, Poole worked closely with Daeschler and Downs to depict this three-meters-long fish on an 11×14 canvas. He looked to fossils, modern-day fishes, previous illustrations of Hyneria lindae and his own imagination to bring life to the monster fish.

“This is a really beautifully ugly fish,” Poole says. “It looks like it wants to bite something.”

1. Clockwise from left: Ted Daeschler, Jason Downs and Jason Poole inspect fossils from Hyneria lindae, collected from roadcuts in Clinton County, Pennsylvania. | 2. Poole inspects a fossil of Hyneria lindae. Real fossils and information gleaned from them played a significant role in Poole’s depiction of the prehistoric predator. | 3. Poole favored a life-like depiction of Hyneria Lindae. In his rendition, he arranged it in motion and placed it in a murky aquatic environment. | 4. Early sketches of the Hyneria Lindae by Poole show him imagining the fish as it would have looked in nature. | 5. Daeschler and Downs worked with author and artist Flick Ford in 2009 to create the first stunning illustration of Hyneria lindae. Comparing and contrasting this illustration with the 2018 painting by Poole demonstrates the wealth of information the scientists gathered since 2009.

Poole’s initial sketches perfectly captured the undulating movement of the fish through the water, but the scientists tweaked the predator’s proportions. Hyneria lindae’s tail was too long, the fins needed to be moved and the curvature of its body was a bit off. Its skull was not shaped quite right, which threw off the placement of the eyes and nose.

“Good paleo-art is art by committee,” Poole says. “I know what looks fun and cool and will grab the eye, and they know what’s correct.”

Where the fossil evidence is lacking, such as the fish’s coloration, there is room for artistic interpretation, Daeschler notes. “In this case the artist can focus on bringing life to the image rather than making it a study,” he says.

Poole was inspired by the pattern on the modern-day muskellunge, an aggressive freshwater predator found in North America that is the largest member of the pike family. Having seen fossils of Hyneria lindae’s scales, he was fascinated by their lacey margins. He made the body a silvery white color, allowing the scales to show through. Poole chose to make Hyneria lindae’s fins reddish to show that they are reflecting red light from the sun, which is penetrating the surface of the water. He added green spots to the body, helping the fish blend in with the murky water while waiting to ambush prey. White dots of paint in the water add sparkle as light bounces off the debris.

Is this exactly how Daeschler or Downs would have imagined Hyneria lindae? Probably not, but that’s the beauty of paleo art. After all, nobody has ever seen Hyneria lindae in the flesh. With a partnership between a stellar paleoillustrator and accomplished scientists, the result is the best possible interpretation. Unless we figure out how to travel back in time, the canvas version will just have to suffice.

Originally published in the spring/summer 2018 edition of Frontiers, the magazine of the Academy of Natural Sciences of Drexel University.